Support Us
Rendezvous In Moscow Inc.

Above: Amanda Broadway, 2015
After all these years, Rendezvous in the Park has been part of the lives of many people. From those who've grown up attending to those who helped get the event off the ground, it represents something a little different to everyone. To give you an idea of what our festival is about, we have stories from a few of our attendees: 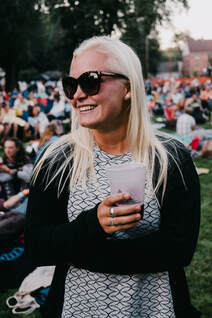 (Photo credit: Jordan Finfrock)
Joelle Stephens
​Joelle Stephens has been attending Rendezvous in the Park “since forever.” She can’t remember ever missing! She says, “I remember being there as a little kid digging in the dirt with the other kids my age while all the adults were up dancing.”

She added, “I don’t miss.” There have been a few times she’s been asked to go on a weekend trip the same time as Rendezvous, and no matter how much fun the other trip sounds (and she says some have almost been worth it), she has always declined because Rendezvous is by far her favorite weekend of the summer.

Joelle describes Rendezvous as a “time to get together with friends and families I don’t see often, but who mean the world to me.” She loves looking at all the blankets spread out across the park, filled with people eating and laughing. The blankets start to clear out as the evening goes on because most everyone moves to the dance “floor”. She even joins them at times. “Though I’m not much of a dancer, Rendezvous is one of the exceptions for showing off my sub-par moves.”

When asked about any favorite memories, Joelle said she has three:
Her advice to anyone who hasn’t attended before? “It’s a must do. If you enjoy being happy, listening to music, and/or dancing you have to go. I guarantee you’ll have a great time!” 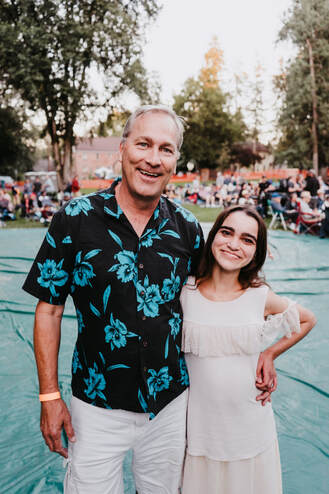 Bruce Livingston and daughter Lydia enjoying Rendezvous 2018. (photo credit: Jordan Finfrock)
Bruce Livingston
Bruce Livingston has been attending Rendezvous in the Park since he first moved to Moscow in 1997, and has attended every single year since then, with two exceptions, even though he moved to Boise ten years ago.  With twenty years under his belt, he must have attended around 60 different evening concerts.
For him, Rendezvous in the Park means “good music in a variety of genres, glorious summer weather in a beautiful setting, all in a wonderfully relaxed and comfortable atmosphere, surrounded by friends.”

He has two favorite memories: “My favorite concert was Mavis Staples, and I loved her embrace of our community, when she encouraged numerous children to climb up on stage and dance with her as she sang the finale.  I also remember Josh Ritter lying face-up on a picnic table, backstage, gazing at a starry sky, spent, after putting it all out there, having sung his heart out for his hometown crowd, and then, when it was over, reveling in the aftermath despite being so exhausted.”

What he misses most, on the rare occasion that they cannot attend Rendezvous, is the fact that he missed the opportunity to re-connect with “hundreds of my closest friends in a community party that can’t be beat.”

The music and the friends, obviously, are important to Bruce. But (perhaps most of all) he enjoys taking the time t”o lie down on his back, gaze up at the cloudless blue sky framed by the trees in East City Park, and enjoy that beauteous scene as the music washes over me.”

​His suggestion to anyone who hasn’t attended before? “Bring a beach chair or a blanket, and prepare to have fun, surrounded by neighbors who love music as much as you do.” 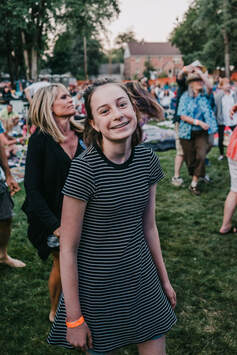 photo credit: Jordan Finfrock
Linnea Sheneman likes Rendezvous in the Park, because it is a mix of familiar and new things. She says Rendezvous means “listening to music, strawberry shortcake (a Rendezvous staple), running around, and convincing her friends to dance with me (or being convinced to dance).”
​
We asked Linnea about her favorite memory of Rendezvous. She replied that she doesn’t have one particular favorite memory because she has been to so many.  “When I think of Rendezvous It’s just this happy blur of great food and dancing with friends. My mom works at the gates every year so when I was little I would get really tired early and I would wrap myself up in one of her jackets and fall asleep on two folding chairs I pushed together, while I listened to the music and that’s a pretty good memory for me.”

​If you haven’t attending Rendezvous before, Linnea wants you to know “Its a great event that makes you really feel part of a community, it's one of the best community events we have here in Moscow and it shows how unique and fun the people and culture are here.”

Jim Boland
Jim has been involved with Rendezvous since its inception. He said, “Rendezvous is the epitome of what it means to live in this community where people are willing to volunteer their time and talents to produce an event for the greater good. My favorite part of Rendezvous is dancing in front of the stage on a warm summer night to the sound of my musical heroes!”

In thinking about what makes Rendezvous so special, Jim says his favorite memory is the year that Jesse Cook headlined.  "We were his only show in the US that was not sold out and people travelled from as far away as Eastern Wyoming to see that show. When we arrived at the park from the airport, and Jesse got out of my car, there was a five-year-old boy (from Eastern Wyoming) who ran up to him and thanked him for coming! Jesse was obviously very touched by that and it stands out in my memory as a special moment in Rendezvous history.”
​
All of us at Rendezvous in the Park believe our festival is special.  Jim has a few words to inspire anyone who has not yet given Rendezvous a try:  “If you will invest the time to come to Rendezvous one time, you will find the quality of the music and the sense of community to be infectious and you will want to return every year...and perhaps even want to live here if you are from another place!" 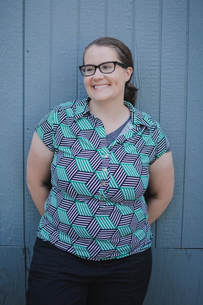 Lisa Harmon
Lisa Harmon is a young mom with two growing boys.  She took a few moments out of her busy schedule to share what Rendezvous in the Park means to her and her family.

“Rendezvous is a great Moscow summer tradition in my family. It is a place for the kids to practice art, music and movement activities during the Rendezvous for Kids day program.  In the evenings it is a place where the whole family can relax with old and new friends, listening to great music, and watching the stars come out.”

Her favorite memory so far is the night Josh Ritter played on the Rendezvous stage, “It was perfect.”

Her family has been going to Rendezvous since they first moved to town and a neighbor recommended it…. so for 11 years now!  Rendezvous for Kids has been a favorite summer activity for her growing boys. It has given them a chance to make art, listen to music and participate in movement workshops with their friends. The rest of summer she loves to see all the kids in their Tye Dye Everything T-shirts running around town!
​
Harmon says, “If you are looking for a new family tradition, you could not do better than Rendezvous for Kids in the morning followed by an evening in the park with the Rendezvous music festival!” 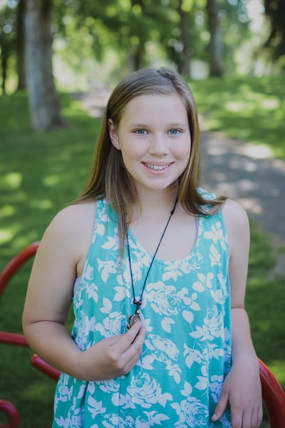 Monroe Mastro
Monroe has not missed an evening Rendezvous music concert since she was born.  Monroe is now 12 and attended her first evening concert at the age of 3 months.  She shared why Rendezvous is so important to her.
“I like the music in the evenings.  I go with friends and neighbors.  It’s fun to dance and to see everyone I know dancing or just sitting and enjoying the music.  There is always lots of time to chat too."

She couldn't pick a favorite memory, and decided she just enjoys the idea of all the years of dancing and having fun mixed together.  Though she did note, "I liked the year we all bought glow sticks and wore them while we danced."

Monroe has attended five Rendezvous for Kids art programs.  "I like all the different art projects you can do.  My favorite was tie dying a t-shirt.  It’s fun and you get to wear the t-shirt that you made.  There was also a magician one year for the entertainment.  He was really good."
​
Last year she volunteered to help set up for the kids' program.  "I’ll do that again this year.  I think the best thing of all about Rendezvous is that I get to hang out with my family and friends from all different generations.  Adults and kids of all ages just sitting together and enjoying the music and the park.”